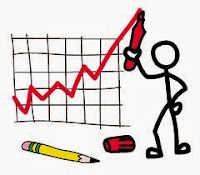 Potential Tucson home sellers should be quite pleased with the March Tucson MLS home sales statistics.

The number of homes sold in March was 1,619 which is up 9.39% from March 2016 and is the second highest number sold since June of 2006. The number of active listings at the end of March was 3,721 which is down 22% from March 2016 and down 1.17% from the previous month. With more homes selling and fewer on the market, could we be seeing additional pressure for higher prices?  Time will tell.

For the full March Tucson MLS report, check out Tucson Association of Realtors March 2017 MLS Statistics
Posted by Jim Wilson at 6:56 AM